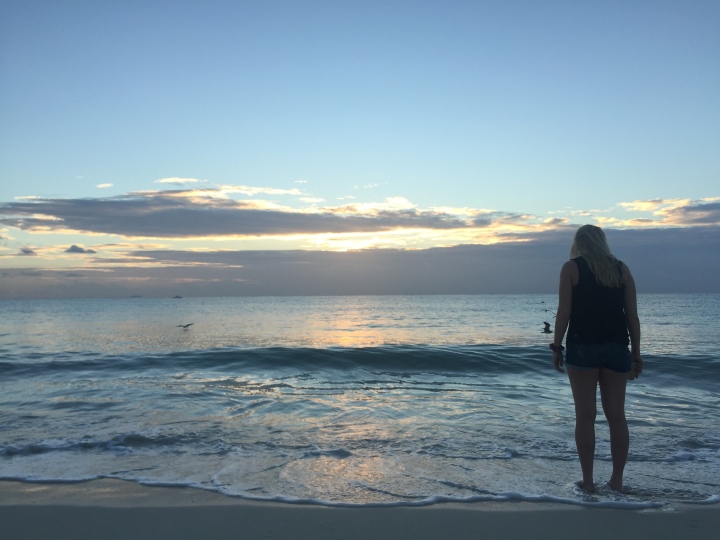 Remember how I was talking about intentionality last week? Yea, well I realized that I wasn’t fully taking my own advice. I have felt sooooo anxious every time I have gone on social media for the last few weeks. Despite this anxiety, I still went on social media multiple times a day.

I was getting kind of obsessive with my Instagram habits and I was getting way too caught up in other people’s opinions and in things that didn’t matter. I finally decided to intentionally step away from all social media and from Netflix so I could re-focus.

Let me tell you that the re-focusing did not occur within the first few days. In fact, I was actually more anxious and more distracted than ever! I honestly think I was going through withdrawals; I was anxious, irritable, I had terrible concentration, and I was probably twitching a bit (I’m only half kidding). Every time that I would try to think of something to write for this blog my stomach twisted into knots and my brain started acting like a dog with a squirrel.

Luckily for me, as the week went on I felt more centered, less anxious, and I was less distracted. I was achieving more with my time and I was feeling a lot more relaxed. I would be lying if I said that my hand never reached for my phone out of reflex, or that I never wondered what was going down on social media, because I did. But by the end of the week I was a lot happier and less anxious!

Despite feeling less distracted, it was still incredibly hard for me to write. In the odd time that I could sit down and concentrate I was really trying to be authentic and vulnerable in my writing. I tried and tried to write about certain things in my life, but as hard as I tried I could not write something vulnerable without feeling pathetic or shutting down.

What I began realized as the week went on was that the word vulnerability seemed to be jumping out at me from behind every corner. It was in the podcasts I was listening to, it was in the books I was reading, it was coming up in conversations, and I could not get the word out of my head!

With all the time I had to sit and think or read the bible this past week, I began to realize that vulnerability was something I have spent years of my life running from. Being my authentic-self was something I have spent an eternity hiding from. Even now as I write this I am struggling to keep putting words on paper (starting this blog in general was a huge internal struggle for me).

I think that subconsciously my life mantra had become the same as Elsa’s was in Frozen, “conceal, don’t feel, don’t let them know”.

Life and certain circumstances have a way of taking who we are at our core, and then smashing it to bits.  It doesn’t happen all at once; pieces of you are broken bit-by-bit over time. Sometimes, it is such a large break that your life feels altered instantaneously forever. It is a break that is seared into your memory, a break that you have no clue how to move on from.

Then there are certain breaks that you might not even notice: a rejection here, a fight there, repeating the same mistake again-and-again, a harsh word every now-and-then from someone you call a friend. These small breaks quickly add up and soon enough you feel that you are irrevocably changed, and you wonder how your got here, and if there is any way to get back to the person you used to be. This happens to everyone and we all deal with it differently, for me I dealt with it by closing myself off.

Slowly, I closed myself off to most people, and eventually I felt like I even closed off to myself. I compartmentalized so much that I forgot who I was at my core. I stopped opening up and stopped talking about my feelings, my struggles, or what mattered to me. I found myself talking about and doing things that I didn’t even care about. I became petrified of talking about things that were meaningful to me.

I felt comfortable being closed off.

Becoming open and vulnerable sounded like the last thing I would ever want to do. However, I realized that there is so much life waiting outside of “comfortable”. Not only this, but I began to truly believe that Christians are not meant to lead comfortable lives. We are meant to lead extraordinary lives (albeit sometimes hard). God has so much more than we could ever imagine waiting for us, but we must be bold enough to trust Him, and we must be bold enough to grab what he has already declared is ours.

Getting back to your soft-unbroken-self is important and do-able, but man is it hard. Softening your soul after being hurt doesn’t even sound like a good idea in the beginning. It sounds reckless.

It is worth it though!

I am still in the process of tearing down the walls that I worked so hard to put up, and it is scary and hard, and it doesn’t happen overnight. However, I am also beginning to feel the warmth of the life that is on the other side of the walls.

I could have never started tearing these walls down on my own. I have had to fully rely on Jesus, and give him all the control I have been harboring. I have also realized that removing oneself from toxic relationships (of all kinds) and from toxic situations is extremely necessary. I cannot emphasize this enough! You will never feel safe enough or good enough to be vulnerable or be your authentic-self if you are not surrounded by people who support you, who care for you, and who love you enough to speak truth into your life. When people who love and value you do speak truth into your life it is also important to intently reflect on what they say.

Life is so much more enjoyable when you can step out of silence and isolation! There is so much freedom when you are bold and confident in who the Creator made you to be.

Let’s also remember that God works through our failures and weaknesses. When we are vulnerable with our shortcomings and struggles then we will see God’s grace work in abundance.

Step out in who you were made to be. Own all parts of who you are; the good, the bad, and the ugly. Let’s share these things with each other so that we can break out of the walls we have built.